My First step towards Christ..

My sister was always more to do with the topic of faith than me and they took me from a young age often to retreat or to youth-Easter-days in monasteries – I liked it very much and the atmosphere was great with the people of my age, but I still was, from the heart not with God.

Although I was on a Catholic girls’ school by the diocese of Mainz, I still never learned anything concrete about the Catholic faith – with hindsight I think that’s really shocking, but Jesus had to lead me to himself in another way ..

I had thought for 26 years not great of God and I was very opposed to the church-going, because it all seemed so boring and I never knew what exactly happened during a holy mass.

I think it all began at Pentecost in 2005. My sister and I were in Vallendar at the Pallotine-patres at a seminar. There was a priest, who seemed very deeply rooted in faith and he has offered on the last day to donate a blessing with laying on of hands on Pentecost Sunday. I went forward to him and when he laid his hands on my head, I felt very strong and beautiful electricity through me. 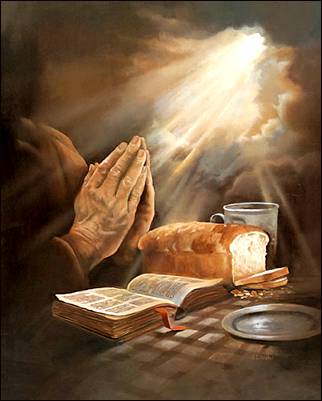 My sister prayed then for a year at the “St. Bridget of Sweden’s prayers”. When she had prayed over, we were just in Gran Canaria. I was there with my sister, rented a super nice seaside hotel overlooking the sea and I leafed through irrelevant in one of her prayer booklets (the prayers of Saint Bridget of Sweden). I read in the opening credits, that if you pray these prayers of Jesus’ suffering every day for one year, 15 relatives will be converted, 15 relatives will come directly into heaven after dying and 15 relatives will be delivered from the purgatory.

The word “purgatory” gave me a huge shock – I never thought that it really exists something like this and I immediately wrote to a priest, who led the Pentecost-seminar in 2005, from” the hotel internet station and he confirmed to me that there really is a purgatory (I am not sure about this, as I don’t find any Biblical evidence for it until this date, though I know it is a popular Catholic belief. I might be wrong; however I don’t want to comment on something which I don’t know). I was completely excited and thought, oh – there must surely be even more than this “superficial blah and then I investigated more and more..

During this time I lived in sin with a man and also I practiced Yoga every day without knowing what I’m doing to my soul. I was 26 and the last time I had made a confession was before my first holy communion.

When I was a short time later in Saarbrucken on the Catholic-day, an old woman came to me and gave me a booklet with the miraculous medal (of St. Mary Alaqoque.) into my hand. But without reading it I pushed all at home in a drawer. However my sister reminded me repeatedly that I should read once the testimony about the medal – and after a few admonitions I read it and was visibly impressed by this true story.

I then also put the medal around my neck and prayed daily the short prayer “O Mary, conceived without sin, pray for us who have recourse to you” – I must add, however, that I was really desperate – because of love, occupation, etc. – otherwise I would have probably not done so!!

Due to my sadness my sister gave me a booklet with the novena “Mary Untier of Knots “. She said that I should also read the many testimonies from all over the world on the website. I got curious and after reading the testimonies I wanted to pray the novena – but the only problem was – I had to pray every day a rosary and I had no idea how to pray it.

After searching for a long time in the internet I studied the rosary and started the novena in the booklet. After 2 days – I was in my flat in Cologne in the bathroom – and when I looked in the mirror, I didn’t believe it: my eyes had changed completely – they were much more clear and pure – first I thought it would be a delusion, but after a few days later my eyes get still purer and more beautiful and when my friends confirmed this to me.

Now I realized that this must be something to do with the rosary prayer – in that moment I felt for the first time that there still have to be something else, something supernatural. After finishing the novena my concerns were answered very quickly and all the problems dissolved into thin air!

A few months later as my sister wanted me to take to a Catholic single meeting in Mainz, I was just not very enthusiastic, but then I had yet to be persuaded…
We met in the coffee shop at a youth hostel and I was totally stoned off of everything … but not just me – some women also went home very early and I wanted to go too, because there was a very donnish atmosphere among the men and the women.

Just as we were on our way to the car, suddenly came a great guy running up to us – and I said to Edi – we now will stay … as the next item on the program went, we all met in the old town in an Italian restaurant: after a brief conversation with the “great guy”, I was clear that he does not fit me and that I would only quarrel with him.